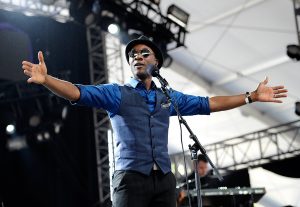 Aloe on stage at Coachella

Raised on salsa, merengue, and cumbia, Blacc fell in love with hip-hop as a kid and started writing rap songs when he was nine. With his lyrics drawing influence from socially conscious artists like KRS-One, he put out his first hip-hop mixtape at age 17. Later developing a fierce admiration for such soul musicians as Donny Hathaway and Marvin Gaye, he also discovered an affinity for folk-rock singer/songwriters during his college years. “One of the most important factors in my transition from hip-hop to being a singer was listening to people like Joni Mitchell, James Taylor, Kris Kristofferson, and Cat Stevens,” Blacc says. “Their songs are full of emotion that’s expressed in strong lyrics, and that had a big impact on me.”

After inking a deal with indie label Stones Throw, Blacc released his solo debut Shine Through in 2006 and sophomore album Good Things in 2010. Boosted by the breakout success of “I Need a Dollar” (which was selected as the theme song to HBO’s How To Make it In America), Good Things reached gold status in countries around the world and paved the way for his signing to XIX Recordings/Interscope Records in 2012. Made in collaboration with groundbreaking producers like Pharrell Williams, Lift Your Spirit dropped on New Year’s Day in 2014, debuted at #4 on the Billboard 200 albums chart, and earned a Grammy Award nomination for Best R&B Album.

Looking back on his musical path so far, Blacc notes that landing a deal with XIX Recordings/Interscope prompted a major moment of reckoning, and led him to re-examine his artistic intentions. “When I signed a major-label contract, I recognized the power of having a larger audience, and I promised myself that I’d use my voice for social change,” he says. And in creating his upcoming album, Blacc has kept focused on making music meant to inspire a positive shift in mindset. “When things happening in the world seem so terrible and dark, it’s so easy to get stuck in all the negative,” he says. “But I try to do whatever I can to help people out of that. I want my music to be the light.”